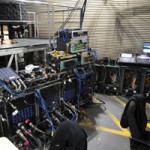 “Everybody who comes through the Grammys leaves happy, and all I use is the onboard processing,” says Reaves. “But my partner in crime at the Grammys, Mikael Stewart, uses the Waves plug-ins quite extensively. He mixes all the dialog and the production elements, so he makes use of the DNS plugin on some of the podium mics.”

Stewart, whose console was directly connected to a DiGiCo SoundGrid server, used the Waves Dialog Noise Suppression plugin to reduce the room regeneration coming back in to the microphones and also made use of the Waves C6 Multiband Compressor.

Tom Pesa, the A-stage monitor engineer, and Michael Parker, monitor engineer for the B stage, each mixed on an SD7 with a redundant engine. This year, for the first time, an SD8-24—supplied by Hi-Tech Audio for the occasion—was positioned backstage at A2 world, and that enabled an assistant engineer to more efficiently monitor signal distribution throughout the venue.

As in previous years, Parker and Pesa each accessed common head amps in the four SD-Racks positioned backstage. But this year, in another first, two SD-Racks were added in parallel in order to provide Reaves with discrete preamp control at FOH. “Those were running MADI to his console. Staying at 48 kHz, we got an entire rack down one MADI cable instead of two,” says Jeff Peterson, ATK’s system designer. A further four SD-Racks were dedicated to outputs. ATK’s recent purchase was comprised of six consoles—two SD10s, two SD7s and two SD5s—plus 14 SD-Racks.