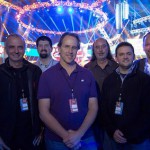 “EAW’s Anya performed as promised,” said Mikael Stewart, ATK’s vice president of special events and the ACA’s FOH production sound mixer. “The coverage, clarity and headroom met all expectations, as with any EAW product. It provided all the necessary elements required by a multi-performance award show. The dialogue levels and music quality was top notch.”

Pre-show modeling of the arena in EAW Resolution Software suggested a system of 40 Anya modules hung 3 columns per side in a 10-6-4 configuration. Each of these 20 module array provided 180 degree horizontal coverage from a consolidated cluster. “The Anya system was very powerful, and punchy,” says Ron Reaves, the FOH music mixer, best-known for mixing The Grammy Awards. “It’s a very musical PA system, in a very modern package. All of the acts were happy with the FOH mix, and I had a great time mixing the show on this system.” – See more at: http://www.prosoundnetwork.com/article/atk-audiotek-takes-anya-to-acas/17222#sthash.iQayAcWE.dpuf