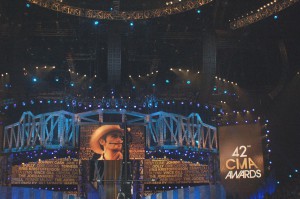 NORTHRIDGE, California – In one of country music’s most prestigious musical events of the year, rental systems provider ATK/Audiotek of Valencia, California supplied a multi-array JBL VERTEC® line array system for the 42nd Annual Country Music Association (CMA) Awards on November 12. The Awards were held at the Sommet Center in Nashville and broadcast live on ABC to a national audience. The CMA Awards is the premier annual event for the country music industry, and this year’s show was co-hosted by Brad Paisley and Carrie Underwood. Featured performers included Kenny Chesney, Brooks &

Dunn, The Eagles, George Strait, Sugarland and Keith Urban, among others.

The Awards featured two stages placed side by side, enabling a live performance to immediately lead into another without the need for a commercial break. Baltzell Audio Design specified a sound system design based upon JBL VERTEC, with a total of eight flown line arrays. Deployed by ATK/Audiotek, the main PA system included two 16-element VT4889 full-size line arrays, arranged in a left-right configuration. Additionally, two out-fill arrays, each containing 13 VT4889 loudspeakers, were dedicated to seating areas outside the coverage pattern of the main arrays. A total of 14 VT4880A Ultra-Long Excursion arrayable subwoofers provided low-frequency support, while three delay arrays each featured 10 VT4889 loudspeakers. These were arranged in a left-center-right configuration at the back of the arena. Six VT4887 compact line array elements provided front fill coverage to critical forward seating areas. The system also featured a total of 72 JBL Control 25T loudspeakers installed under the first six rows of audience seating and masked by color-matching grilles.

In addition to hosting a variety of live performances, the Sommet Center is home to the Nashville Predators of the NHL. The Center was designed with multi-functionality in mind to accommodate a wide spectrum of events. “The venue was built asymmetrically, so it’s not a typical oval-shaped arena,” said Pat Baltzell of Baltzell Audio Design and (along with Rick Scheimer) one of two Front of House Engineers for the CMA Awards. “The arena was built for entertainment as well as hockey, with one end actually lower than the other, so you can easily load stage equipment onto the end designed for live entertainment. The opposite end has a large architecturally-designed bass trap that does a great job of managing frequencies below 100 Hz. This results in acoustical behavior that is very similar whether the arena is empty or full. There isn’t the usual consternation during sound checks where the event managers are worrying about what the audio will sound like during the event. In my opinion, this is one of the best-sounding arenas in the United States. So it puts us all at ease, because everyone—the producer, the artists and the sound crew—has a good idea of the way the system will sound on show night.”

Baltzell notes that the decision to use VERTEC line arrays is also based on consistent, predictable performance. “The VERTEC speakers do a great job,” Baltzell added. “I’ve been designing line array clusters for a number of years. For events like this, where you have a great deal of dialogue from hosts, presenters and winners, in addition to the musical numbers, the sound system needs to perform well for music as well as large-scale dialogue. The VERTEC line arrays provide that level of versatility.”

Michael Abbott, Audio Producer for the CMA Awards, confirmed satisfaction with the results achieved by the sound vendors and their choice of loudspeakers. “JBL VERTEC line arrays have proven to be consistent in providing clear, powerful and controllable sound for some of the world’s highest-profile live events and the CMA Awards was no different,” he noted. “The VERTEC system performed flawlessly and allowed us to stay focused on the task at hand.”

Michael Abbott can be reached via email hidden; JavaScript is required