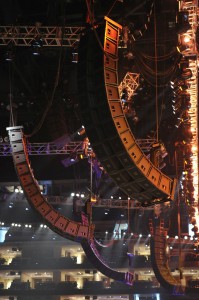 The annual GRAMMY Awards telecast, known as Music’s Biggest Night®, is presented by The Recording Academy® to honor outstanding achievements in the production and performance of recorded music. This year’s awards featured performances by some of the biggest names in the music industry, including Bruce Springsteen, The Beach Boys, Bruno Mars and others, highlighted by a special tribute to Glen Campbell. Adele earned multiple GRAMMY Awards, including Song Of The Year and Record Of The Year for “Rolling in the Deep,” and Album Of The Year for 21.

ATK Audiotek also equipped all three pianos on stage with three AKG C414 microphones each. The pianos were featured in multiple performances throughout the GRAMMY Awards, including performances by Diana Krall, Jennifer Hudson and Alicia Keys. Rusty Anderson, who played guitar during Paul McCartney’s performance, used an AKG DMS700 digital wireless system in his guitar setup, while Chris Brown used a Crown CM311 microphone for vocals.

“Providing live sound for the GRAMMY Awards is always a unique challenge, given the variety of performers and elaborate productions,” said Brett Valasek, General Manager, ATK Audiotek. “VERTEC line arrays consistently perform well for us and our system, combined with the new in-house PA system at the STAPLES Center, provided the necessary coverage and output to deliver high-quality sound to the live audience.”

HARMAN (www.harman.com) designs, manufactures and markets a wide range of audio and infotainment solutions for the automotive, consumer and professional markets — supported by 15 leading brands, including AKG, Harman Kardon, Infinity, JBL, Lexicon and Mark Levinson. The Company is admired by audiophiles across multiple generations and supports leading professional entertainers and the venues where they perform. More than 25 million automobiles on the road today are equipped with HARMAN audio and infotainment systems. HARMAN has a workforce of about 13,000 people across the Americas, Europe and Asia, and reported net sales of $4.2 billion for twelve months ending December 31, 2011.