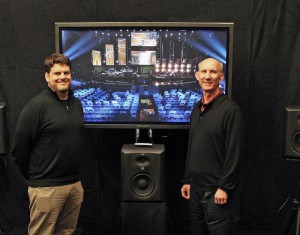 The annual GRAMMY Awards telecast, known as Music’s Biggest Night®, is presented by The Recording Academy® to honor outstanding achievements in the production and performance of recorded music. The GRAMMY Awards were broadcast live in HDTV and 5.1 surround sound on the CBS Television Network. More than 28.1 million people watched this year’s Awards telecast, the second-largest audience for the GRAMMY Awards since 1993.

ATK Audiotek supplied the live sound reinforcement system for the Awards, which featured left-right columns of 12 VTX V25 fullsize line array elements per side for the main PA, with additional left-right columns of 12 V25 per side for out fill, along with a center cluster of 18 VTX S28 arrayable subwoofers in cardioid mode (two arrays of nine S28 subs each), for a total of 66 VTX loudspeakers. Six VRX932 Constant Curvature loudspeakers served as front fill, with left-right rear delay arrays of eight VERTEC® VT4889 fullsize line array elements each. Powering the loudspeakers were 16 Crown Audio VRack 12000HD and four VRack 4x3500HD and the entire system was configured using JBL HiQnet Performance Manager™ software. The house sound system at the STAPLES Center, featuring VERTEC VT4888ADP-DA powered line array elements, was used to supplement the live sound system with five enclosures from the center end array used for rear upper deck and VIP box coverage.

“This year we used the newest evolution of the JBL line array,” said Jeff Peterson of ATK Audiotek. “The V25 had a very clear and smooth high end which didn’t distract our attention. All of the low-end power we’re accustomed to with the VT4889’s was there and then some. The S28 sub is so efficient we never came close to using all of the available power. Tying it all together, Performance Manager gave me all the control and monitoring I needed.”

In the Television Committee Room, Michael Abbott, Audio Director for the GRAMMY Awards, along with Recording Academy executives, relied on JBL LSR6300 Series studio monitors to listen to the mix of the show in real time. “We were able to take advantage of the LSR6300 Series’ RMC Room Mode Correction technology to ensure that we were accurately hearing the subtleties in the mix,” Abbott said. “As has been the case for several years, the LSR6300 Series performed flawlessly at the GRAMMY Awards.”